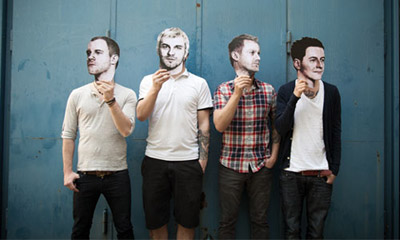 Judging by the rate and intensity 3 FEET SMALLER have been going at to go through with their thing ever since their formation 8 years ago, it could only be a matter of time before something big happened. With a cool head they are starting 2009 at full speed, and as of now, countries will be toured under a new flag: that of SONY. While others can think about what the step towards the Major Label will imply for the band, 3 FEET SMALLER will be doing what they are best at doing: not giving a damn about over- and underground and fulfilling their own vision in the pop-cultural no man’s land Austria. At full tilt! With passion! On their way so far, on stages of all sizes throughout Europe, this precisely has attracted a faithful, yes even fanatic audience.For their new and fourth album “December 32nd”, the band for the first time has ventured into the realms of a concept, which reflects itself artistically in songs, lyrics, titles and artwork. As the title already gives away, the concept album evolves around an imaginary day at the beginning/end of a year. The songs on the album bear titles that refer to times of the day, so listeners experience a specific part of the 32nd of December – the day on which the new year has neither begun, nor the old one ended – a twilight zone.

From a musical point of view the album can be considered as the outcome of a major maturing process. For the first time strings and accordion are embedded in the originally predominantly punky/rock style of the band. 3 FEET SMALLER no longer feel compelled to meet others’ expectations. Instead they prefer to let their songs rock hard or softer as they please. Their melodiously love struck, energetic high speed sound, which makes music-journalism-clichés such as “melody-punk” rock out of your mind, before you can even think of them, whilst not being able to keep up with counting the stage divers at their concerts, has been independent all along. But now the band has found itself.

What can be expected from this trio after taking a look at their Online Casino Österreich sponsored tour schedule is a band that will rock the stage off its foundation, and many a location that will doubtlessly be overflowing with visitors. Overstatement? No! More likely the result of longstanding empirical observation.